So this is going to be kind of a negative post, and for that I apologize in advance. But despite travel being amazing most of the time, there can occasionally be difficulties, and I don’t want to gloss over those. Like anything in life, it’s not always rainbows and unicorns.

We did NOT have a great time in KL.

By the end of our month, I was nearly ready to call it quits on all of Southeast Asia. If we hadn’t already made plans to meet family in Bali for Christmas, we might’ve flown back to North America right then.

There were a few reasons why KL was so hard on us:

• Heat and humidity: KL is very hot and humid. Like every moment you’re outside, all you can wonder is what the hell you are doing outside. It’s oppressive and makes you slink back inside to your canned air that’s at least cool enough to keep you sane. We love being outside though. So this made it difficult.

• Lack of places to walk: In the outskirts of KL where we stayed, Subang Jaya, there were no parks nearby, just concrete: streets and parking lots. If it wasn’t so damn hot, maybe that wouldn’t be too bad strolling around the streets, but as it was, it was all too much effort. This meant we hardly ever spent time in any kind of natural surroundings.

We had to go to the center of the city to find a park.

• Terrible kitchen set-up: In our little apartment, we had what was essentially a single-burner camping stove with one pot and one pan, and a rice cooker. It can be exhausting to want to eat at home because walking to try to find food is a hassle, but trying to figure out how to cook anything decent without making the same thing you had for dinner the last two days in a row.

• No good grocery stores: Joe and I realized that having a large, well-stocked supermarket is important for us. We don’t do well when we have two meat choices (chicken or some cut of what I’m guessing was beef), only a few vegetable options (I know you like ridiculously long green beans and peppers, but could I please buy some broccoli?), and nothing in the way of cheese, yogurt, and a bunch of other goods I would like to have.

By the time we were leaving KL, I was going stir-crazy and had about had it with an entire region of the globe. Joe wasn’t that much better, since this time also included his visit to a ten-day meditation retreat, which he left after four days. Safe to say, we had a rough month.

But this situation taught us a lot, and I’m glad to say that we know ourselves a little bit better than we did before. We know what things don’t matter (and what things really do) for us to have a high quality of life.

Let’s talk about a few positives though. 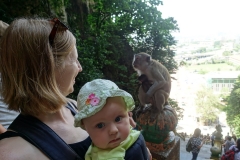 (Click any of the thumbnails to enlarge the images.)

Though our cooking situation sucked, when we ate out.. yum. SE Asia has great food.

Even though this experience was less than stellar, we enjoyed several other locations in Southeast Asia, and we haven’t written Malaysia off as a bad place. We want to go back, and explore other areas of the country. We just went about it wrong, and learned: no big cities far from parks or other green areas. Good kitchen setup. Near a good market. We hear Penang, Malaysia is nice! Maybe next time.

Where we headed next though really turned things around: Siem Reap and Angkor Wat!